Title: Seven Days of You

Format: Print ARC; received in exchange for an honest review

Synopsis: Sophia has seven days left in Tokyo before she moves back to the States. Seven days to say good-bye to the electric city, her wild best friend, and the boy she’s harbored a semi-secret crush on for years. Seven perfect days…until Jamie Foster-Collins moves back to Japan and ruins everything.

Jamie and Sophia have a history of heartbreak, and the last thing Sophia wants is for him to steal her leaving thunder with his stupid arriving thunder. Yet as the week counts down, the relationships she thought were stable begin to explode around her. And Jamie is the one who helps her pick up the pieces. Sophia is forced to admit she may have misjudged Jamie, but can their seven short days of Tokyo adventures end in anything but good-bye?

Before receiving this book in the mail, I really didn’t know too much about it, other than what I had gathered from the synopsis. Nevertheless, I jumped right in and was completely blown away! This story is a perfect mixture of adventure, love, family, culture, and heartbreak, with just a dash of quirky humor.

Our protagonist, Sophia, was utterly hilarious and entirely relatable. After spending a few hundred pages in her head, I felt connected to her in a way that made me lose a sense of my own surroundings. At times she could seem a bit ridiculous and melodramatic, but as a teenage girl of her exact age, I really appreciated seeing her irrational worries, and her rambling thoughts. I don’t always feel like I get to see characters in YA literature that face very real (if slightly inconsequential) problems such as friendship drama or unrequited crushes. While not everyone may be able to identify with Sophia or the issues she dealt with, I certainly did. Sophia also has dreams of becoming an astrophysicist, which I really loved! We need more books that represent girls with an interest in science and/or mathematics.

The writing in this book is quite stunning, which I don’t typically expect from YA romance. It maintained a beautiful balance between detail and purpose, and a few times I couldn’t help but read a certain paragraph over and over.

“I closed my eyes and listened to the rumble of footsteps and the echo of voices from giant screens and the whir of trains, coming and going. The rain continued to wash down on me, and it reminded me that this was real and I was real, and for one whole second, that was the only thing in the world that mattered.”

The descriptions of Tokyo are sure to make you fall in love, though I do have to admit I wish there had been more thorough representation of Japanese culture. Repeatedly, I felt as if Tokyo could’ve been any major city in the world; the only real defining features were the food they ate and the references to Studio Ghibli movies. I also wish there had been better representation of Japanese people in general (all the characters are white except one), but I could be somewhat forgiving considering all the characters are foreign exchange students (and this legitimately has an important role with the plot). But, I’m by no means an expert on Japan or Tokyo, so please let me know if I am misinterpreting something. I will be on the lookout for any other thoughts on this particular aspect of the book.

The romance itself was just downright adorable. It was realistic and heartfelt, gut-wrenching and brilliant. It wasn’t insta-love or cliché (my usual fears for YA romance), but rather a slow transition from tumultuous friendship to unrelenting passion. Jamie is kind and empathetic, always there for Sophia even when she doesn’t realize she needs him. He is by no means perfect, but neither is she and their flaws compliment each other beautifully.

To my surprise, I almost felt like this book could’ve stood on its own without the romance (though that’s not to say I didn’t love it). So much of Sophia’s story actually focuses on her relationship with her mom and sister (whom I both loved as characters), as they all struggle to come to terms with their inevitable departure from Tokyo. Sophia herself spends the majority of the book battling her past in order to face the uncertain future, and must find a new home when she feels as if she’s leaving everything behind. I loved how the author wove in short anecdotes from the past so that the reader really got a beautiful look at how much Sophia changes and develops throughout the book.

Plot-wise, there were a handful of twists that definitely surprised me and kept me flipping pages, but overall it wasn’t entirely original. Seven Days of You felt very familiar to Anna and the French Kiss (which I’m a huge fan of), but the book’s true story lies in its characters.

Because the book takes place in just the span of a week, I was a bit nervous for the ending; I had absolutely no clue how the author was going to tie everything up in a way that was satisfying. But, have no fear, because the ending was one of my favorite parts. Without spoiling anything, I’ll just say that it was achingly realistic, but also hopeful for the future in a way that made my heart sing.

So there you have it! I highly suggest this for all fans of the Anna/Lola/Isla trilogy, as well as fans of YA contemporary in general. Seven Days of You was a gorgeous, fast-paced read with characters that really managed to capture my heart and my attention –  I have no doubt that it will do the same for many of you. Thanks so much to the publisher for sending me an ARC of this book!

Have you read Seven Days of You? What did you think? Is it one of your anticipated releases of 2017? Send me all of your thoughts!

All quotes should be checked against the final copy.

Aila @ One Way Or An Author

I’m so glad you liked this one! The cover is so adorable.
Unfortunately, I was never really a fan of Anna and the French Kiss so I’m not sure if I’ll like this? As much as I love another travel romance story. The relatable heroine sounds pretty awesome too! But I’m not sure if I should really pick this one up, especially if the setting of Tokyo was a letdown. :\ I mean… this is one of the major countries of the WORLD, and you’re stuck about Studio Ghibli films? Please.
Lol, great review though!

Mia
Reply to  Aila @ One Way Or An Author

Hmm that’s definitely a tricky choice! If you didn’t care for Anna, this might not be for you. They were very similar in a lot of ways – foreign city setting, exchange students at a special “academy,” artsy & edgy teenage friend group (with similar teenage drama), love triangle, daily outings amongst the city, and the central theme of searching for the meaning of “home”. But in a lot of ways they were different! I think Seven Days of You was a lot more realistic, and the romance felt more lighthearted in nature than with Anna & Etienne. SDoY also… Read more »

Oh, I LOVE this cover so much! I was debating requesting it on NetGalley, and now kind of wish that I had. I do love Anna and the French Kiss, so I’d probably love this one. Great review!

Ah thank you! I hope you get to read this one too! The cover certainly is adorable, I feel like we don’t get a ton of pink covers in YA anymore (but maybe that’s just me, lol) If you liked Anna, you’re almost sure to like this!

I agree. We could use more pink. Have you seen the cover for The Hundredth Queen by Emily King that comes out in June? It’s pink and FABULOUS! This is definitely going on the TBR pile!

I haven’t!! But man just from the title that sounds like a gorgeous book ? I will definitely look it up first chance I get!

I’ve been really curious about this book! Now I really want to read it after seeing you compare it to Anna and the French Kiss. I love that book! Great review.
Thanks for linking up on Saturday Situation!

An Interview with the Queen of the Afterlife | Gravemaidens Blog Tour

An Interview with the Queen of the Afterlife | Gravemaidens Blog Tour

The Queen is Back, This Time With Ghosts | Review: Ninth House 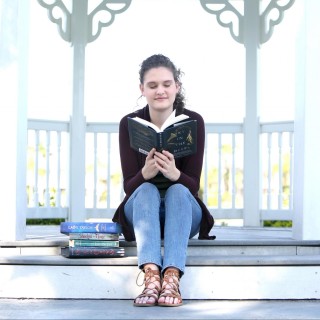 Helloooo friends, I hope everybody is having a goo

*Edited from my last post because I think this is

Hi friends!! It’s been a hot second since I post

Anybody else starting to get an eye-strain headach

An Insta-Love Tragedy | Review: Empress of All Seasons (+ My Victorious Return to Blogging)